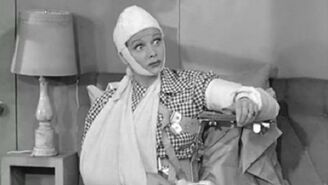 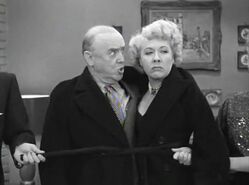 The Ricardos try to reconcile the feuding Mertzes, but they end up arguing themselves. To try to win their spouses back without losing their pride, both Lucy and Ricky come up with a scheme. Lucy tries for the sympathy vote by wrapping herself in bandages and pretending she's been hit by a bus, whereas Ricky pretends that the apartment is on fire so he can save Lucy and look like a hero.

Ricky: Yeah, before the evening is over, there will be feathers flying all over the place...

Fred: (about Ethel) Is that your idea of a cute, young chick? You'll never shop for my poultry!

Ethel: (to Fred) Well, I'm sorry your mother looks like a weasel...

Fred: Were THOSE the best?!

Lucy: Well, that all depends.

Lucy: On what kind of bus I get hit by- local or express!