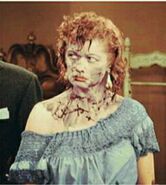 While on an uncomfortably cramped train ride to Rome, Lucy is offered the part of a typical American tourist in an upcoming Italian movie by director Vittorio Felipe. She is told that the English title of the movie will be Bitter Grapes. Lucy thought the title was a literal one, and she assumed that the picture was going to be about the winemaking industry and how the locals squeezed out the grape juice by foot. Ricky warns her to not go on a pursuit of "soaking up local color", but Lucy naturally doesn't listen. She finds out from the bellboy that old-fashioned winemaking still occurred in a small town named Turo, so off she goes on her journey.

In Turo, Lucy is chosen to work in the vats, stomping grapes, because her feet were as big as "large pizzas." Lucy takes the place of regular vat worker Rosa. The other worker given the task of working in the vats was a small but feisty Italian woman named Teresa. Lucy starts off on her grape-stomping adventure having lots of fun messing around in the vat. But soon, she is tired, and attempts to leave the vat. Teresa pulls on Lucy's arm, trying to get her to keep working, but Lucy shakes off Teresa and accidentally pushes her into the crushed grapes at the bottom of the vat. Teresa and Lucy end up in an all-out war in the grape vat.

Lucy returns to the hotel covered in purple-blue grape stains from head to foot. When Vittorio Felipe sees her, he explains that the movie is not  about the grape/wine industry, and that the title is just symbolic. He says that Lucy can't be in the movie, because she's currently unable to scrub off the grape stains, and he can't take a chance that she'll look normal come filming time. So, Felipe offers Lucy's small role to Ethel, since she is just as much of a typical American tourist as Lucy. Ethel accepts, and Lucy mutters "censored" remarks of jealousy about Ethel under her breath.

Fred: They're roomy enough. It's just that you're roomier!

Ricky: I appreciate that, Fred, but you gotta draw the line someplace.

Ethel: Oh, we're lucky he hasn't got us hitchhiking.

Fred: Will you stop yappin'?

Ethel: Oh, 13 more hours in this sardine can!

Lucy: The sardines are better off. They've got all that oil to wiggle around in.

Ethel: Hey, I got an idea- hey, look! There goes Gina Lollabrigida!

Ethel: Well, you got us into this. You can just stand up!

Ricky, Fred, and Ethel: Has she ever considered acting?!

Fred: Ah, it's nothing, Ricky.

Fred: Smaller than the Yankee Stadium. Joe DiMaggio would have hit 80 home runs in that hatbox.

Ethel: Oh, what can I expect when I expose him to culture?

Fred: Well, they look great to me.

Ethel: If I let my hair go like that, you'd never let me hear the end of it.

Fred: Honeybunch, if the rest of you looked like that, I wouldn't care if you were bald!

Lucy: Oh? What do you call it?

Ricky: How about that? It's the same thin' in Italy!

Fred: Oh, you're probably gonna be one of the bunch!

Lucy: I know a few words. What I don't know I'll shrug.

Lucy: Tell him anything you want. I have nothing to hide. Tell him the truth.