Lucy Gets a Paris Gown 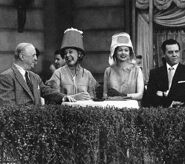 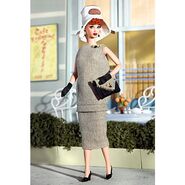 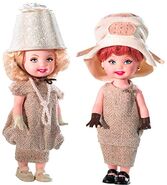 After going to a fashion show of all the new chic Parisian styles, Lucy makes up her mind that she wants a Jacques Marcel dress. Ricky refuses to spend the money on another designer dress, not after buying Lucy a Don Loper original while in Hollywood the previous year. Lucy decides that she is going to go on a hunger strike until Ricky agrees to buy her a dress.

By the third day of the hunger strike, Lucy looks so gaunt and weak that Ricky is losing his resolve. He tries to force her to eat something, but Lucy refuses to break her vow. When Ricky leaves all upset, Lucy rushes to make a sandwich out of food that she has hidden throughout the hotel room. Ethel is Lucy's food supplier, and she asks Lucy what to sneak in for dinner that night. Lucy asks for a roast chicken.

Ethel brings back the chicken, and Lucy hides it in a camera bag. Ricky returns with a very nice surprise- he bought Lucy a Jacques Marcel dress, because he can't stand to see her starve. When Ricky goes to take a picture of Lucy in the new dress, her finds the roast chicken and realizes that Lucy has been faking the hunger strike all along. He intercepts the dress box when Lucy and Ethel play "monkey in the middle" with it, and he runs off.

To trick their wives as a way to get back at them for the phony hunger strike, Ricky suggests that he and Fred have dreses made out of "real potato sacks" and a phony Jacques Marcel label for their wives to wear. They also plan to make Lucy a hat out of a horse's feedbag and Ethel a hat out of an empty champagne bucket. Ricky and Fred proudly present the ugly outfits, and while Lucy and Ethel are puzzled by their strangeness, they're still Paris originals (so they think), and they proudly wear them out to lunch at a cafe. Everyone at the cafe is staring at Lucy and Ethel's bold fashion choice, including Jacques Marcel, and soon, Ricky and Fred can't keep from laughing and reveal the truth. Lucy and Ethel are beyond humiliated, and they cover themselves with a tablecloth as they flounce off back to the hotel.

Later, Ricky and Fred have apologized for pulling such a stunt. As part of the make-up agreement, Ricky must buy a Jacques Marcel dress for Lucy and pay for half of Ethel's dress that Fred has to buy. On the way to the dress shop, the foursome stop to eat at the cafe. They can't believe their eyes when they see some of Jacques Marcel's models wearing copies of their burlap creations! Ricky and Fred say that the girls don't need a new dress now, because they have the originals of what is now a fashion statement. But Lucy and Ethel admit that they burned the burlap dresses as soon as they could.

Fred: I'd like to pull a string around your neck!

Fred: That' sjust the start. Where they finish, nobody knows!

Fred: Well, if you don't, the promise will break you!

Ricky: Well, I do want to make Lucy happy, and if she goes to this place and she's not able to buy a dress, she will feel miserable. So, if I don't show her this invitation, I will actually be sparing her all that misery. I'll be doing her a favor!

Fred: You know, it's wonderful how you're always thinking of Lucy?

Fred: Welcome back to the husband's union!

Ethel: Oh, I could've done better with a book of wet matches.

Ricky: No, I did not. I said they were hard to get.

Lucy: It's my own fault. He's beginning to think like me.

Lucy: I've just got to have one. I'm gonna get one if it's the last thing I do!

Ethel: Well, it will be.

Ricky: And do you know me well enough to know that, if you do, the end might come sooner than you expect?

Ethel: I'll be lucky if he buys me my lunch!

Ricky: She's too late for Halloween.

Fred: Yeah, and she's too early for April Fool's!

Fred: That explains it- they're from Mars!

Fred: [That model]'s got on my old flannel bathrobe.

Fred: (looks at Ethel) Yeah, and I know who was Mother's little big, fat helper!

Fred: Well, listen- at those prices, I could afford to be a good egg, too.

Fred: Yeah, and some of the potatoes are still in it!

Lucy: Well, leave it to Jacques. What an inspired use of burlap!

Fred: Honeybunch, you were made for it!