Lucy Wants to Move to the Country 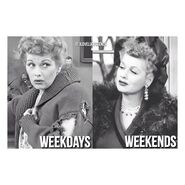 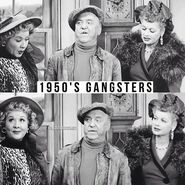 After visiting Grace Munson in Connecticut the past weekend, Lucy is dying to move to the country. Ricky doesn't want to leave New York. Lucy puts on an act about how horrible city life is. She scrunches the furniture together to make the place look small and crowded, she shakes dust on everything to make the city look dirty, and she powders her face with flour to give herself a look of "city pallor." But Ricky knows what she's up to and doesn't bother to show interest in her scheme.

Or does he? When Ethel comes up to talk to Ricky, he reveals that he has secretly put a deposit down on the country house Lucy liked so much, and he plans to give it to Lucy as an anniversary present. Ethel immediately starts sobbing, worrying about losing her best friend, and this forces Ricky to tell Lucy the surprise. Lucy also starts sobbing, not wanting to leave the Mertzes, and Ricky says that his deposit is not refundable.

Lucy and the Mertzes decide to try getting Ricky's deposit back themselves. They go over to the Spauldings' residence dressed as gangsters. They want the Spauldings to think that they are unfit to live in the house. It works, and the Spauldings are terrified at what they see, especially the water gun the gang brings along with them. Ricky arrives to explain the whole thing, but when he finally gets the deposit back, Lucy realizes just how much she loves the country home. So, Ricky is forced to pay an extra $500 for the house, as payment for the Spauldings being scared out of their wits. After Lucy accidentally squirts Mr. Spaulding with the water gun, Ricky's extra fee increases to a total of $550. But the Ricardos have their house in the country and can't wait to start their new life in Westport!

Ethel: Now, don't tell me that Grace [made THAT herself]...!

Lucy: Ethel, whose side are you on?

Ethel: Well, I know it'd be wonderful for Little Ricky, but I'm thinking of Big Ethel! Gee, if you move to the country, I may never see you again!

Lucy: Oh, now, it's not as bad as all that. You and Fred can come out on the train on weekends. The round trip ticket is only $3.08.

Lucy: Oh, honey, won't you at least think about [moving to the country] before you say "no"?

Ricky: Fred, you really mean that?

Fred: No, but Ethel made me say it.

Fred: Ethel, put your fingers in your ears.

Fred: Because the only way you can keep a secret is not to hear it!

Ethel: You're going to MOVE

Fred: Sure. We can go out and see 'em on weekends.

Ethel: Fred, round-trip tickets on the train cost $3.08 a piece.

Fred: Like I said, they can come in and see us on weekends!

Fred: Well, they're givin' shots for everything these days.

Lucy: Why, I"ve never seen her like this before!

Fred: Oh, she's out of control!

Ricky: Me. I'm gonna be living in the country!

Fred: Oh, that was before Ethel turned on the waterworks.

Lucy: Well, you could tell him it doesn't fit.

Fred: That shouldn't be hard for you, Ethel.

Gangster Lucy: Oh, you mean that little dark suit and hat with the veil and little white gloves?

Gangster Lucy: I was on my way to a masquerade party- went as a lady!

Eleanor: Ice? Oh, we have a refrigerator.

Joe: Your husband? I thought he was a bandleader?

Gangster Lucy: Fingers, I thought I told you not to pack a rod, unless we were pullin' a job? Now, hand it over!

Gangster Fred: Why should I? You a'int the Brains!

Gangster Lucy: No, but I'm MRS. Brains, and don't you forget it, bub!

Gangster Fred: What do I care what HE likes?!

Gangster Lucy: Watch out, or you'll step on the Brains's toes, Fingers!

Joe: That's right, Ricardo, and you can drop that phony Spanish accent!

Fred: Except that we might have to spend the rest of our lives in the pokey.

Ricky: If my hands weren't up here [in the air], they'd be right around your neck!

Joe: Yes. You frightened Eleanor and me out of our wits, and it'll cost exactly $500 to recover.﻿