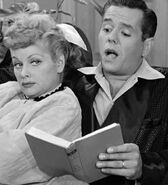 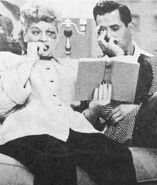 Ethel hits Fred square in the face while opening the door. Fred says that he's going to get a black eye, and nobody will believe that he actually got his injury from getting hit by a door. Ethel says that everyone should believe Fred when he tells the truth. After all, that's what really happened. But Ricky makes them remember a time when the Mertzes didn't believe the real story about how Lucy got a black eye.

Lucy and Ricky are reading a thriller novel together. Lucy gets really into it, acting out the argument parts. Fred and Ethel overhear Lucy from outside the Ricardos' door, and they think that Ricky and Lucy are having a huge fight, and that Ricky hit Lucy. Right before the Mertzes phone to come visit, Ricky tosses Lucy the book, and it hits her hard, giving her an instant black eye. When the Mertzes see that Lucy got a black eye, they think Ricky really was the one who gave her it.

The next morning, Ethel goes to see Lucy to get the true story of the black eye, still not buying the book story. Lucy decides to have fun with her, and she makes up a tale of how Ricky found out that she's in love with another man. Meanwhile, Fred wants to patch things up between the two falsely fighting lovebirds, so he sends Lucy some flowers that are supposedly from Ricky. But he signs the card with his own name!

When Ethel finds out that Lucy got flowers, she instantly thinks that they're a gift from the "other man." Lucy lets Ethel read the handwritten card, to show her that they've got to be from Ricky. Ethel sees Fred's handwriting and signature, and thinks that Fred is Lucy's lover! Ethel swats Fred with the box of flowers, and on the way out of the Ricardos' apartment, Fred meets Ricky in the hallway and slugs him for causing all this trouble.

The next day, Fred and Ethel go back to the Ricardos'. They now believe the true story that Lucy got her black eye from being tossed a book, because the same thing happened to Ethel the previous night. Now, all four of them have a black eye!

Ricky: Sure. "Madge went into the darkened room, and there she saw..." ...Lucy's thumb.

Lucy: No! We were just sitting around, talking abotu the weather, his new show at the club. I told him I was in love with another man, and all of a sudden, for no reason...