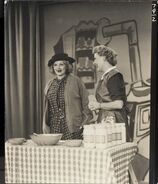 As one of Fred's many "get-rich-quick schemes," Lucy and Ethel go on TV to sell Aunt Martha's Old-Fashioned Salad Dressing. But the girls end up paying more to make the salad dressing than they do selling it!

Lucy: Oh, leave her alone, Fred. So, she's got a good appetite.

Ethel: I don't know where I'd put it.

Fred: Just drop it in to the bottomless pit.

Ethel: Yeah, and we'll make it with old fashions.

Ethel: We'll sell more of it!

Lucy: Since I just remembered that her husband runs a television station.

Ethel: Do you think she'll go for the idea?

Lucy: I think so, especially if we cut her in, to the tune of, say, three cents a bottle.

Ethel: Yeah, she likes that kind of music!

Lucy: (as Isabella Klump) Aunt Whose Old-What Salad Which?